Public Health
The Two Epidemics of Bubonic Plague in Puerto Rico, 1912 and 1921

The increased speed and size of the merchant ships of the late 19th century allowed the spread in Puerto Rico of a little-remembered pandemic, the bubonic plague. It is a bacterial illness transmitted by the bites of fleas from rats. Without antibiotic treatment, it is lethal in 60% of cases. It causes inflammation of the lymph nodes, commonly in the groin, armpit or neck. These masses are known as “bubones” (for the Greek word for groin). The name of the illness consists of the generic term “plague,” which refers to any generalized illness, affliction or calamity, and its clinical symptom, the bubones. If the infection settles in the lungs, it is called pneumonic plague, a more dangerous variant that is more transmissible directly from person to person through pulmonary secretions.

On June 14, 1912, authorities were concerned about a death in Puerta de Tierra (San Juan). They knew of epidemics in other parts of the Caribbean. The nation had the necessary health structure to respond appropriately, a rare situation in public health in almost any time or place. Scientific knowledge of the illness and the methods for controlling it had solid foundations. The island had just reorganized its Health Department and the director of its laboratory, Isaac González Martínez (1871-1954, better known for his later work in prevention and treatment of cancer) had experience with the disease. He had participated in a Spanish commission that studied the outbreak of bubonic plague in Oporto (Portugal) in 1900. That same year, the U.S. Congress extended the jurisdiction of the U.S. Public Health Service (PHS) to include research into health issues. The agency, under the Foraker Act, had a key role in health issues on the island and experience in responding to bubonic plague epidemics in other sites.

Unfortunately, the government lost credibility with its first announcements, perhaps due to lack of experience (neither the governor nor the Health Commissioner were on the island), but certainly due to an incorrect emphasis on calming the public instead of informing them honestly. On June 17, 1912, separate reports by W.R. Watson (interim Health director) and S.B. Grubbs (chief of the quarantine station, overseen by the PHS) said the suspected cases had been investigated: “The rumor that these cases are bubonic plague are totally absurd” (Watson said) and “The possibility of this plague invading Puerto Rico is very remote” (said Grubbs). (In his memoirs, Grubbs only recalled that “we recommended everyone not to be frightened.”)

The next day, González Martínez reported preliminary positive results. On June 19, the interim governor, M. Drew Carrell, officially recognized the presence of bubonic plague in San Juan and requested additional aid from the PHS. Public reaction was depicted in a cartoon on the front page of the newspaper El Tiempo on June 21, with the title in quotes to indicate irony – “Prudent health measures”: a line of cars leaving the city, two with a flag that says “fearitis.” Chickens flying out of a hen house follow the cars.

On June 30, it was decided that all work related to eradicating the plague would be under the charge of the PHS, but the U.S. Army, the federal Secret Service and the Puerto Rico Health Department also played important roles. The control measures included capturing and eliminating rats, and an enormous urban cleanup effort to finally eliminate the potential breeding grounds for rodents (both elimination of garbage and structural alterations to buildings). The description of the measures taken to eradicate bubonic plague present a range of rapid and exhaustive governmental actions that literally changed the foundations of San Juan and other municipalities. Despite opposition from the League of Property Owners, in less than a month new laws were written and passed to regulate structures to make them rat-proof. For example, owners of humble housing with wood floors were urged to raise them above the ground to a height that allowed them to keep the area clean or to improve the foundations to prevent entrance by rodents into dark areas. Regulations addressed the storage of food, management of waste, required maintenance of commercial establishments, chicken houses and stables, and a warning about planting fruit trees that could feed rats. “All coconut palms in the San Juan suburbs and surrounding areas were made rat-proof,” according to the Health Department.

Although demolition of unhealthy sites was limited and selective, it caused displacement of poor families and led to strong public criticism of the way the PHS was operating. However, in contrast with previous experiences, there was little tension between the local and federal governments. In the end, all the top island administrators were federal appointments and the PHS had developed efficient methods for controlling the bubonic plague in San Francisco (California) in 1907. Still, it was the first time that legal rules aimed at preventing rodent infestation in buildings were formulated in Puerto Rico. 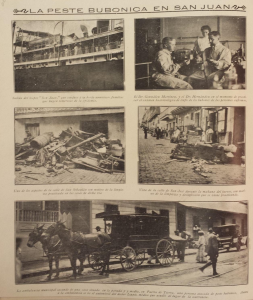 The epidemic lasted three months (last case, September 13, 1912) and caused a total of 55 illnesses among residents of San Juan (51), Carolina and Dorado. All showed symptoms of bubonic plague and 36 (65%) died. Infected rats were also found in Río Piedras, Caguas and Arecibo. It is not known precisely how the plague was introduced to Puerto Rico, but it is suspected that it came from the Canary Islands.

From February to August of 1921, another epidemic of bubonic plague caused 20 deaths (61%) in 33 cases in eight municipalities: San Juan (15 cases), Río Piedras (1), Carolina (4), Bayamón (1), Manatí (3), Arecibo (1), Juncos (1), and Caguas (7). Infected rodents were found in Guaynabo and Fajardo. This time (under the Jones Act), the Health Department directed the campaign against the epidemic, with help from federal agencies and personnel from the Rockefeller Foundation, which was helping the agency in other projects.

After the second epidemic, the Health Department maintained a plague detection laboratory for several years. It was joined with the (general) Biological Laboratory in 1929, which took over its functions several years later. The disease has not reappeared in Puerto Rico.

All of this is extensively documented in local and U.S. publications, waiting for someone who is interested in the project of a thorough historical analysis.