History
May Day in the world and in Puerto Rico

The observance of May Day originated in the era when capitalism began to become the dominant socio-economic system in England, in the last third of the 18th century. This starting point is tied, in turn, to the industrial revolution and the use of machinery in production. In capitalism, the social classes basically consist of the business employers and bankers on one side and the paid workers on the other. The relationship between the two comes down to those who have the capital and those who provide the work for pay.

In England, after the abolition of feudalism and the relationship between nobles and serfs in 1760, the majority of workers became salaried. The process of transition to capitalism, in the Middle Ages in Europe, also took place in Belgium, the Netherlands and industrial areas of France, Italy, Germany, Spain and other countries. In each site, the process was different, though in some cases they were interconnected.

The working class and the proletariat are also used to describe the salaried workers. The proletariat was the lowest segment of workers in ancient Rome, defined as a landless class, producer of “prole” or children, and employees of the owners and the state in various tasks. In the early 19th century, the term was reintroduced and applied to the working class.

The work day ranged from 10 to 16 hours in different countries. During the 19th century, workers frequently called for better conditions and a shorter work day. Industrial businessman Robert Owen (1771-1859), from Wales in Great Britain, understood the deplorable conditions of workers and established model industries in Scotland. He provided adequate housing, child care and education for children and reduced the work day. Owen coined the famous phrase of the Three Eights: eight hours of work, eight hours of recreation and eight hours of rest. The eight-hour work day was proposed as the norm and workers struggled for that in various countries around the world.

Observance of May Day arose from the struggle by the working class in the city of Chicago, a site of great industrial development in the United States. The Chicago working class in the 1880s consisted of thousands of immigrant families from Europe, including many Germans. Organized workers promoted strikes and demonstrations in Chicago and other cities, demanding an eight-hour work day, between May 1 and May 4, 1886. The final day, in the Haymarket Square of that city, a bomb mysteriously exploded, killing four workers and seven police officers and injuring 200 workers. The government authorities and police accused various labor leaders without evidence and arrested them. August Spies, Albert Parsons, Adolf Fischer and George Engel were executed on the gallows. Oscar W. Neeb, Samuel Fielden and Michael Schwab were given prison sentences, commuted in 1893; and 22-year-old Louis Lingg committed suicide in prison, with the cry “Long live anarchy.”

During the 19th century, resistance and opposition to the capitalist system arose in political currents such as socialism, communism and anarchism. All were based on different postulates. There were reformist socialists and revolutionary socialists, for example. Contrary to the official definition of anarchy as chaos and disorder, anarchists postulated the abolition of the state as the center of power and authority and the realization of democratic and egalitarian self-determination for workers of all parts of the economy. In that they agreed with the socialists and communists, who differed from the anarchists in that they believed it was necessary to have a transition period from capitalism to socialism with the state in the hands of the workers.

In 1864, the International Workingmens’ Association (IWA) was founded and based in London. Its main leader was Karl Marx, co-author with Friedrich Engels of “The Communist Manifesto” (1848) and author of “Capital” (1867). The IWA organized various branches in Europe and the United States. It included workers from various political factions, republicans, communists, socialists, and anarchists, to promote solidarity among workers and countries and to work toward a coordinated struggle by workers at an international level. There were, however, conflicts between the factions, especially between the communists and the anarchists led by Mikhail Bakunin. The First International, as it was known historically, dissolved in 1876.

Puerto Rico, like all countries at one time or another, was interconnected with the historical process of the establishment of the capitalist system. In the era of Spanish colonial rule, there were various specific stages with their own forms of labor and specific economic activities in Puerto Rico: (I) Apportionment and enslavement of the indigenous people and gold mining economy, 1508-1541; (II) Massive importation of enslaved Africans and sugar trade economy, 1542-1659; (III) Black slavery and servitude of rural sharecroppers, and an economy based on livestock and lumber, 1660-1779; (IV) Slavery, servitude and paid work (labor booklet regime) under a plantation economy (sugar, coffee, tobacco), 1780-1873. All of these forms of labor came together until slavery was abolished in 1873. After that, paid work with low wages characterized the labor force at the first sugar mills, from 1873 to 1898.

Origins of the labor movement and May Day in Puerto Rico

After the abolition of slavery and the labor booklet regime, Puerto Rico fully entered into the world of paid labor and capital, from 1873 to the present. In the last quarter of the 19th century, the first labor organizing appeared: mutual aid societies, cooperatives and recreational and cultural casinos. Workers protested and went on strike for better working conditions, against abusive taxes on basic consumables and merchandise in general, and for a reasonable and rational work day.

In Puerto Rico, the observance of May Day was promoted by a group of artisans who sought to form a union and a newspaper that represented the interests of their class, in San Juan in 1896. In a key meeting, in February of 1897, José Ferrer y Ferrer, and Ramón Romero Rosa (typographers), Eduardo Conde (framer and painter), Eusebio Félix Santiago and Fernando Gómez Acosta (carpenters), Norberto Quiñones (cooper) and José Rivera (work unknown) decided to begin publishing the newspaper “Ensayo Obrero” on May 1, 1897. They were joined by a young Spanish immigrant, Santiago Iglesias Pantín, also a carpenter, who had previously been in Cuba and was persecuted by the colonial authorities.

Observances of International Workers Day in Puerto Rico began with “Ensayo Obrero.” In 1897, Puerto Rico was under a despotic Spanish colonial and military rule that did not allow labor demonstrations. The following year, observance of May Day was not possible because of the Spanish-American War and the invasion and occupation of Puerto Rico by the United States from July 25, 1898, on.

Under the U.S. military government, however, in a complex political and labor situation, workers organized the Regional Federation of Workers (FRT) and held the first mass demonstration on May 1, 1899. The tenacity of militant workers began the century-old tradition of marches and demonstrations for social justice. This photo shows the May 1 march on San Francisco Street, in Old San Juan, to La Fortaleza, the governor’s residence. 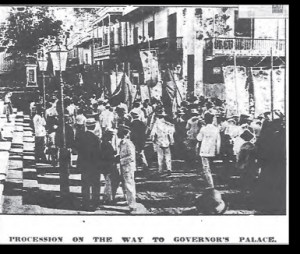 In that era, as in the United States, the eight-hour work day was being implemented and in the heat of a strike by sugar workers in 1899, General Guy V. Henry approved it in Puerto Rico, as reported in the newspaper “Gaceta de Puerto Rico” on May 2, 1899. On May 17 of that year, Henry’s term ended on the Island. Both in Puerto Rico and in the United States, due to opposition and maneuvering by the business class, the general implementation of the eight-hour work day was postponed until the end of the Great Depression and the crisis of capitalism in 1929-1933. This accomplishment required a longer struggle by labor. It also was a difficult road with political and labor differences that continue today. May Day is observed, however and continues to mark an important time of struggle and vindication and convergence of workers around the world, and in Puerto Rico.