Throughout history, women have been subjugated, oppressed and considered inferior beings, lacking some of the rights and opportunities men have had. Feminism is a political, social and cultural current that arose in the early 18th century due to the growing awareness of the inferior treatment women received in patriarchal societies. However, it wasn’t until the middle of the 19th century that the demands of women and some men took on the form of a social movement and the name of “feminism.”

According to the Spanish Royal Academy dictionary, feminism is defined as “the principle of equality of rights for men and women.” Feminism’s struggle for equity does not mean superiority of women or discrimination against men, but rather the recognition of both as having the same rights and opportunities.

The feminist struggle in Puerto Rico

Historian and Jesuit priest Fernando Picó said that women were the most marginalized group in history. He said that while talking about groups and topics that had been overlooked in terms of research and had been considered irrelevant and were discarded by other historians in the past. Women’s recognition of their marginalized condition in patriarchal society led them to their struggle.

The feminist movement in Puerto Rico had two significant historical moments that coincide with their equivalents in other parts of the world. The first occurred in the early 20th century with the struggle for the right to vote and universal suffrage. In that era, as a result of economic development policies implemented after 1898, women began to enter spaces where they had been absent before, giving them the opportunity to access education and begin to raise issues of equity and justice that had not been part of the historical discourse until then.

One of the initiatives that contributed to this awareness was the improvement in literacy that occurred after the U.S. invasion in 1898. This led to a growing number of women serving as teachers, initially without formal education. It should be mentioned, however, that since the early 19th century, under Spanish rule, for example, Celestina Cordero (1787-1862) and her brother, Rafael Cordero, gave classes to girls in Old San Juan.

Eventually, women were allowed to go to the Normal School (the beginnings of the University of Puerto Rico) to become educators. Also, beginning in the last third of the 19th century, the women who worked in the sugar and tobacco industries began to be involved in the labor movements on the island. In that era, outstanding women included Ana Roqué de Duprey (1853-1933), Juana Colón (1875-1967) and Luisa Capetillo (1879-1922). The most significant event of these early decades of the 20th century – and the one that became the symbol for the struggle of Puerto Rican feminists led by Roqué de Duprey – was the recognition of women’s right to vote in 1936.

The second historic moment in feminism in Puerto Rico began in the 1960s and took on greater momentum in the 1970s. At a global level, the United Nations recognized the lack of equality between women and men and the need to establish agendas to work toward equity. That commitment was finalized at the International Year of the Woman Conference in Mexico City in 1975. During that decade, as Roxanna Domenech Cruz wrote in her article “Boricua feminist movements,” (2016), there was a rebirth of feminism in Puerto Rico, mainly as a result of women’s access to college education and their participation in the manufacturing industry. Domenech Cruz noted that “the new historiography rescues the voices of Puerto Rican women…”, referring to the women who led the feminist movements of the early 20th century. In this feminist resurgence, organizations were created to protect women and to fight for equal rights and opportunities. Some of these organizations were Women Together Now in 1972 and the Federation of Puerto Rican Women in 1975. In terms of public policy, Law No. 57 of May 30, 1973, created the Women’s Affairs Commission for the purpose of recognizing equality of rights and opportunities for women and the need to “eliminate conditions that cause and perpetuate discrimination against women.” 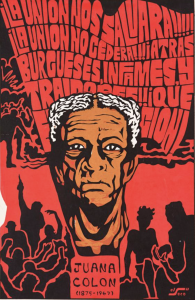 The effort for women’s rights continued in the 1980s. In 1982, the Puerto Rican Organization of Women Workers was formed to defend the rights of workers on the Island. In 1989, the Peace for Women Coordinator was formed, a non-profit organization that united organizations dedicated to helping, educating and supporting the victims of gender violence.

Outstanding figures in the feminist movement in Puerto Rico

Ana Roqué de Duprey was an educator, journalist, scientist and feminist leader. She was born in 1853. From an early age, she was educated by her grandmother, an experienced teacher. She is considered the founder of the Puerto Rican feminist movement. Roqué de Duprey was a teacher for 13 years, at time in history when only 16% of the Puerto Rican population was literate. She founded organizations such as the Puerto Rican Feminist League in 1917 and the Association of Women Suffragists in 1924. She shared that mission with other pioneering feminists such as Isabel Andreu de Aguilar (1887-1948) and Mercedes Solá (1879-1923).

She also founded publications such as “The Woman” in 1893, “The Evolution” in 1902, “20th Century Woman” in 1917, “Puerto Rican Album” in 1918 and the “Women’s Herald” in 1920. She called for women who could read and write to have the right to vote. She was a member of the Astronomical Society of France. She received an honorary doctoral degree from the University of Puerto Rico. Among her books were “Universal Elements of Geography for Elementary and High School Teaching,” (1888), “Explication of Spanish Grammar” (1889), “Explication of Pedagogy” (1894) and “Study of Puerto Rican Flora” (1908). She also wrote articles, short stories and novels. In the latter category, her best known work is “Light and Shadow” (1903). She died in 1933.

Luisa Capetillo was born in 1879. Her mother was French and her father was Spanish. Her education, mainly from her mother, was more advanced than what girls had in that era. Learning to read and write was a big achievement for women. She is considered one of the pioneers of the feminist movement and the unionization effort in Puerto Rico. She was a journalist, writer and labor leader. She also worked in the needlework industry. In 1906, she worked as a reader in the tobacco factories. It was there that she deepened her education. With a naturalistic and anarchistic attitude, she fought for women’s right to vote, regardless of whether they could read and write. She was an outstanding labor leader for the Free Federation of Workers.

In the popular culture, she was known as the first woman to wear pants in public in Puerto Rico. In Havana, she was arrested for wearing men’s clothing. Notable among her publications are “Libertarian Essays” (1907), as well as contributions in “Voices of Liberation” (1921), to which figures such as Emma Goldman, Rosa Luxemburg and Clara Zetkin contributed. Capetillo argued that “Tyranny, like freedom, has no homeland, nor do exploiters or workers.” She died in 1922, a victim of tuberculosis, a common disease in that era. In addition to these two women, many others worked to form and build the feminist movement in Puerto Rico. For example, Juana Colón, unlike Roqué and Capetillo, was illiterate and the descendant of enslaved people. She faced more discrimination than other women due to her race and economic status. However, from the picket lines she also called for better working conditions in the tobacco industry and for the right to vote for all women. She became an agent of change, raising awareness in other sectors in the central part of the Island. For her many struggles, she was called “the Joan of Arc of Comerio.” She was an important leader in the Puerto Rico Socialist Workers Party, in which she defended the rights of women to participate in public affairs.

Although women in Puerto Rico, like at the world level, have achieved recognition of many of their rights and an expansion of opportunities as a result of these struggles, this is not enough to conclude that full equality has been achieved. Today, women continue to face labor, social and educational discrimination. Statutes and laws for equity do not prevent women from being excluded from positions of leadership, from being paid less for equal work and responsibilities, and women continue to be the subjects of sexual harassment, both in the public and private sectors. The account above, along with the brief look at the outstanding women among what we call today the Puerto Rican feminist movement — Roqué de Duprey, Capetillo and Colón – is intended to shed light on what has been achieved and put into perspective what has still not been obtained. In the 21st century, there is still more to do. The discrimination that gave rise to the feminist movement still exists