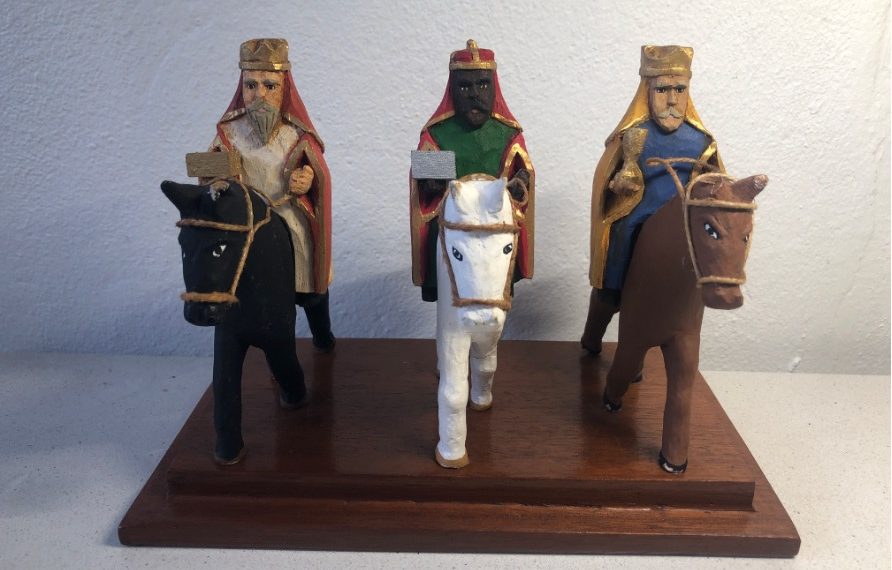 Wood carvings of saints have become a national symbol of Puerto Rico. It is a form of artisanry and popular imagery also called “Santos de Palo.” As its name indicates, they are traditionally wood carvings of the saints, the Virgin Mary and the Three Kings of the Catholic Church. It is believed the carving of saints began in the 17th century, when the churches were far away from many Puerto Ricans who lived in the central part of the island. The carvers were also known as “santeros.”

Documented popular Puerto Rican imagery includes, in addition to wood carvings, small tablets carved in relief. In early examples, the body appears carved in one piece, except for the hands and the elements that differentiate one saint from the others (carved and added later when the piece is finished). This explains why so many examples of our collections are missing extremities, for example. The saints have been created, traditionally, from native wood, although some have capes, shrouds and other attributes made from canvas or reinforced paper. Also documented, though less commonly, are images created from plaster or paper. The size of Puerto Rican saints varies between five and twenty-five inches tall, although some have been carved full size.

Activities such as worshiping and carving saints were closely tied to the tradition of having altars in the home, due to the distance between the churches and the remote rural areas in the countryside. In the home, the image of the saint was placed on a shelf or in a small niche, which was generally located in the upper part of the bedroom or living room. The niche might be a small wooden box with two doors that opened and closed. Sometimes it was built with a small pane of glass on the front that transformed it into a small showcase. In some cases, the upper part of the niche was decorated with a small peak that resembled the roof of a house with two gables. The niches represented a small sanctuary or reliquary.

The oldest saints that have been documented date to the 17th century. The worship of saints in Puerto Rico appears to have acquired particular importance beginning in the 19th century, however, as a large number of carvings date to that era. Faithful Catholics believed the saints protected their families and interceded on their behalf with members of the divine hierarchy, composed of the Holy Trinity: The Father, the Son and the Holy Spirit.

The Catholic Church’s own practices toward devotion to the saints included praying to them, lighting candles and celebrating their liturgical festivals. There were also other practices that took on a social air and contributed to enriching the tradition of popular worship. One of these was “making the saint pretty,” or repainting it every year on the eve of its liturgical festival. Another option was a “wake” or a “vow,” which began on the eve of the saint’s liturgical festival, giving thanks for some favor granted. On these occasions, the carving of the saint was removed from the niche and placed on an altar of palm leaves on a table that was also covered with a cloth or lace. If it was believed that the saint had cured a person or animal, “miracle” offerings of wax and metal were made that represented part of the body of the one that was cured.

There are many iconographic variations of the saints, although it seems certain models have always existed. Among those are the relationships between the patron saints and their towns: Saint Anthony, Our Lady of the Immaculate Conception, Our Lady of Mount Carmel, Our Lady of the Rosary, Our Lady of Montserrat, Saint Joseph, Saint Michael, Saint Raphael, the baby Jesus and Saint James the Great. Also common are carvings of Saint Blaise, Saint Barbara, Saint Raymond Nonnatus, Saint Rita and the Three Kings.

The art of carving saints in Puerto Rico nearly disappeared. One of the factors acting against it was the process of evangelization of Protestant religions that developed in the early 20th century and tried, among other things, to “burn the images of saints.” However, this threat led sociologists, anthropologists and other scholars to rescue these images that had been passed from generation to generation. The saints, more than just religious objects, represent a cultural and historical facet of our people and have become the subject of sociological, anthropological, religious and artistic-artisanry studies.

One consequence of this revaluation of carved saints as a work of cultural value was that they became objects for collecting and investing. Similarly, institutions dedicated to preserving and promoting our heritage, such as the Institute of Puerto Rican Culture, became interested in promoting art of popular imagery through exhibitions of saints in museums and competitions.

Over time, the carvings of saints have become a national symbol in Puerto Rico, going beyond their religious context to become an object of cultural value on their own with international relevance. An example of that, for example, are exhibitions of the Teodoro Vidal collection at the Smithsonian Institution.