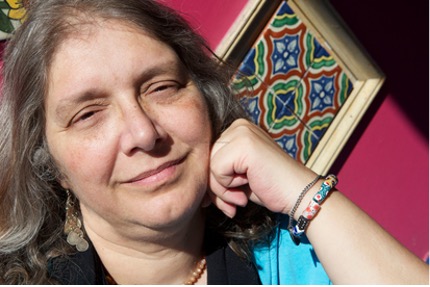 Aurora Levins Morales’ writings are characterized by her commitment to give expression to the experiences of women, Puerto Ricans, and other populations of color. In her works she validates the prevailing notion among feminists that “the personal is the political,” since her writing is deeply connected to her sense of identity and her social and political convictions and activism. The author is committed to denouncing the oppression, invisibility, and prejudices of U.S. society experienced by these marginalized groups. But her writings also introduce a vision of cultural hybridity that defies traditional notions of assimilation and reflects the various components of Levins Morales’ own sense of identity. This is expressed in her poem “Wings,” where she proclaims: “I am the Jewish great-great-granddaughter of Puerto Rican slaveholders. I am the Puerto Rican great-great-granddaughter of Ukrainian socialists. I am the surviving branch of a family tree split at the turn of the last century…”.

The daughter of a U.S. Jewish father and a New York Puerto Rican mother, Levins Morales was born in 1954 in the barrio of Castañer (Lares), and spent her early years in the mountains of Indiera Baja in Maricao, Puerto Rico. At a young age, her parents instilled in her a love for reading and writing, and for progressive ideas, as well as a strong sense of social justice. The family left the island for the United States and lived in several different cities, including New York City and Chicago. She received a BA degree from the University of California and a doctoral degree in women’s studies and history from the Union Institute in Ohio.

Levins Morales moved to Berkeley, California in 1976 and lived there for over three and a half decades. It was there that she began publishing and reading her work in public appearances. She first drew critical attention when a selection of her writings and those of her mother, Rosario Morales, were included in the groundbreaking feminist anthology, “This Bridge Called My Back: Writings by Radical Women of Color” (1981), coedited by prominent Chicana writers Gloria Anzaldúa and Cherríe Moraga. This anthology opened an important space in U.S. feminist literature for minority women writers. A few years later, mother and daughter coauthored the interwoven multi-genre collection, “Getting Home Alive” (1986). This volume included their own individual texts, but also pieces that were written jointly. Some of the selections make powerful statements about how experiences of gender, class, and racial oppression are yielding the construction of new emancipated and decolonized identities among the colonized.

Some of Levins Morales’ subsequent works include the book “Remedios: Stories of Earth and Iron from the History of Puertorriqueñas” (1998). In this volume, she combines her feminism with a keen sense of the history of the Americas from the perspective of the oppressive experiences of women and colonized indigenous and African cultures. This book was followed by the collection of essays “Medicine Stories: History, Culture and the Politics on Integrity” (1998). The latter has been described as a work that “offers the paradigm of integrity as a political model to people who hunger for a world of justice, health and love.” Another book published by the author that focuses on the woman’s body and how it responds to different forms of oppression is “Kindling: Writings on the Body” (2013).

Morales Levin’s most recent work include the collection of poems, “Stilts: Prose Poems” (2019) and “Cosecha and Other Stories” (2014). The latter is a collection of short stories authored by her and others written by her late mother Rosario Morales, who passed away in 2011. The volume includes a combination of stories inspired by their shared experiences; others are fictional.