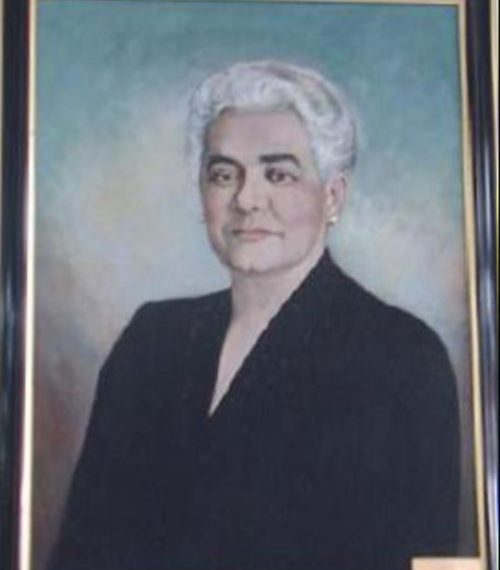 Like many other members of the 1930s generation, she was known for defending teaching in Spanish, the vernacular of Puerto Ricans, at a time in the Island’s history when English was imposed as the main language in the public schools. She dedicated a large part of her life to developing a methodology of teaching Spanish.

Antonia Sáez Torres was born in the municipality of Humacao on May 10, 1889. Her parents were Abelardo Sáez and Teresa Torres. She went to elementary school in her home town. In 1903, she moved to Río Piedras to study at the Normal School of the University of Puerto Rico (UPR), where she earned a teaching certificate in 1908. She returned to Humacao, where she worked as a third and fourth grade teacher in the Tow Grade School. The schools in her town only went to sixth grade, so she worked with the Department of Education to extend them to eighth grade.

Through this effort, a “continuation school” was established and she was assistant principal (1910-1911). When it was converted into a high school, she worked as the Spanish teacher.

In the summer of 1923, she was an instructor at the UPR Summer School, which had been created the year before for the purpose of offering preparatory courses for public school teachers. In 1925, she began teaching night classes at the Central High School in Santurce while she continued her studies at the UPR, where she completed a bachelor’s degree (1928) and a master’s degree (1930) in Art, with a specialization in Spanish language and literature. After earning a scholarship (1930), she moved to Madrid, where she got her doctoral degree and wrote her thesis, “The Theater in Puerto Rico: Notes for Studying It.”

When she returned to the Island (1931), she worked as an instructor in the UPR School of Education. As part of her work, she contributed to the process of establishing a fixed method in the Department of Education for classifying teachers in the system. She also contributed a methodology of teaching Spanish, the field in which she specialized, in the elementary and secondary schools.

It was a tenacious defense of the Spanish language and its use as a means of instruction instead of English. She believed students should know the vernacular before learning a foreign language, so it was necessary for teachers to be well versed in the subject. These and other educational ideas were the topics of articles she published in various journals in Puerto Rico. Among them are “The Elementary School Teacher” (1959) and “Meaning of the Vernacular: Linguistic Points” (1962), published in the Institute of Puerto Rican Culture Magazine. She also contributed to the magazines Índice, Brújula, the Association of Graduate Women magazine and Asomante. As an essayist, she was known for her defense of Puerto Rican culture and identity.

Her doctoral thesis, “The Theater in Puerto Rico,” was published in 1950. According to Dr. Josefina Rivera de Álvarez, Sáez was the first to present a work on the history of the Puerto Rican theater. Her work is considered among the first to study island literature. Her writing mainly focused, however, on the methodology and teaching of Spanish: “The Language Arts in Elementary School” (1944), “Reading, Art of Language” (1948), “The Language Arts in High School” (1952) and “Essential Basics for Teaching Spanish” (1959). The prologue for the last of these was written by Spanish linguist Samuel Gili Gaya. The first two won prizes from the Institute of Puerto Rican Literature.

After retiring from teaching in 1959, the University of Puerto Rico made her professor emeritus. Later, in 1961, she received the Gold Medal from the Institute of Puerto Rican Culture for contributing to the culture of Puerto Rico through her work to preserve the Spanish language as the medium of instruction in the public schools. In the final years of her life, she worked for that institution as an adviser and researching. She died on July 20, 1964, in Tokyo, Japan, while on a trip through Asia.

She left behind an unpublished work, “Paths of Memory,” that collected her memoirs. It was published in 1967 with a prologue by her friend Concha Meléndez. Today, an elementary school in Humacao and another in Toa Baja carry her name, as well as the cultural center in her home town.