On April 25, 1898, the United States declared war on Spain, which began the expansion of the country beyond North America. The accusation that Spain had caused an explosion on the U.S. battleship “USS Maine” on February 15 of that year in Havana, resulting in 266 deaths, was the perfect pretext. At that time, the United States refused to investigate the causes of the tragedy.

Imperialist expansion and U.S. economic interests in the last Spanish possessions in the Caribbean brought the Spanish-American War to the coasts of Puerto Rico. The first cannons were heard on the morning of May 12, 1898. Under the orders of Admiral William Sampson, a fleet of 11 ships fired on the capital for three hours. “A rain of projectiles, thundering like trains, passed over our heads; it was a true storm of iron; there in the sea, as the day began to brighten, the silhouettes of enemy ships could be seen, lit up from time to time by the calls of their cannons.” Artillery Captain Ángel Rivero Méndez, in charge of the Spanish troops at the San Cristóbal Fort in San Juan, thus described the beginning of the war in Puerto Rico.

The intense bombardment lashed the city, causing significant material damage and two deaths. It sowed panic among the residents of the capital and many decided to flee the city. The trauma of the bombardment was on top of shortages of food and other basic goods. Hunger was already a problem due to the economic crisis affecting the island and it grew worse due to the naval blockade that the U.S. military forces imposed on Puerto Rico. Puerto Ricans’ loyalty to Spain wavered in the uncertainty. Hunger and the constant shadow of disease sifted through the Puerto Rican population. The war had come to the Island and support from Spain did not arrive. It never came. The Spanish fleet under Admiral Pascual Cervera was trapped and destroyed in Cuba by the forces led by Admiral Sampson in July.

The experience of the bombardment and information provided by U.S. military intelligence led Washington to understand the weak status of Spanish military defenses in Puerto Rico. Meanwhile, U.S. public opinion, brought to a boil by an imperialist press backed by investor interests, favored taking possession of the Island. President William McKinley, following the plans of his administration and the Republican Party, ordered General Nelson A. Miles to invade Puerto Rico. The experienced military officer immediately laid out a plan of attack that included the use of fresh troops. On July 17, 1898, Miles defeated the Spanish at Santiago de Cuba. Four days later, with intentions of conquest, ten ships under Miles’ command sailed for Puerto Rico.

On July 25, the coast of Guánica was the site of U.S. troops disembarking. In the beginning, Miles’ plan was to land at Fajardo. However, he changed plans while still at sea. The landing at Guánica let him easily capture the cities of Ponce and Yauco, where separatist sentiment was present. From the beginning, he counted on the support of broad and influential sectors of the Island to legitimize the military invasion.

The Associated Press compared the military operation on Puerto Rican soil to a picnic. Resistance was minimal and the number of victims was few. The outnumbered and poorly equipped Spanish troops gave ground. The invading troops occupied the main municipalities of the south and west of the Island: Yauco on July 27, Ponce on July 28 and Guayama on August 5. A significant portion of the population welcomed the U.S. troops. In some towns, the reception was celebratory. Many people saw in the blue uniforms and the stars and stripes a hope for liberation from the Spanish yoke and the possibility of political and economic vindication. In that spirit, Nelson Miles pronounced the following words in a messianic speech on July 28 in Ponce: 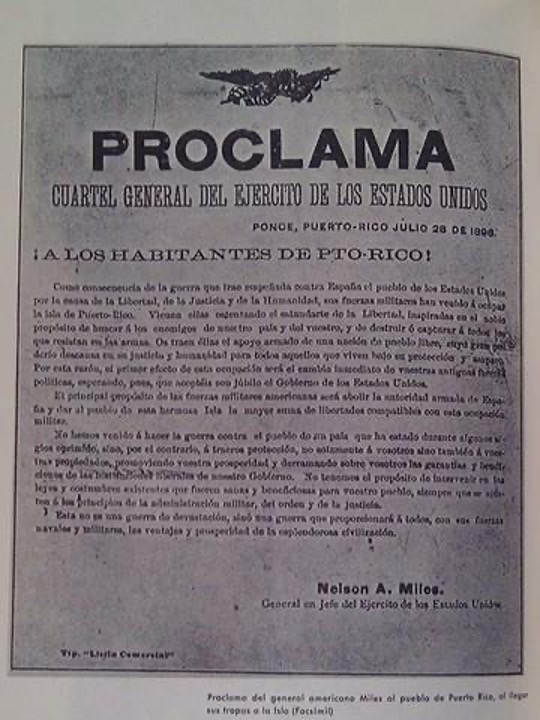 “To the residents of Puerto Rico: In the prosecution of the war against the Kingdom of Spain by the people of the United States in the cause of liberty, justice and humanity, its military forces have come to occupy the Island of Porto Rico. They come bearing the banner of freedom inspired by a noble purpose to seek the enemies of our country and yours, and to destroy or capture all who are in armed resistance. They bring you the fostering arm of a nation of free people, whose greatest power is in its justice and humanity to all those living within its fold.[…] The chief object of the American military forces will be to overthrow the armed authority of Spain and to give to the people of your beautiful island the largest measure of liberty consistent with this military occupation. We have not come to make war upon the people of a country that for centuries has been oppressed, but, on the contrary, to bring you protection, not only to yourselves, but to your property, to promote your prosperity and bestow upon you the immunities and blessings of the liberal institutions of our Government.”

After the surrender of Ponce, part of the U.S. troops headed west and were able to capture Mayagüez. The other part marched on the Central Highway toward Juana Díaz and Coamo. In the Asomante barrio, the Spanish troops dug in and stopped the advance toward Aibonito. Poorly equipped and without support, these troops fought heroically against the U.S. Army.

The armistice was signed on August 12. On October 18, the Spanish abandoned the Island and the U.S. flag was raised in public buildings. On December 10, 1898, the Treaty of Paris was signed, in which Spain ceded to the United States the control of the island of Puerto Rico. A military government was installed under the command of General John R. Brooke. Soon, the aspirations for annexation, autonomy and independence spelled out in a plebiscite immediately after the invasion – as leaders such as José Julio Henna had called for before the invasion – were snuffed out by the reality of the new colonial regime, and still are today.