History
July 25: a day with many meanings

Exhibit of the pages of the ELA Constitution of Puerto Rico in the Capitol in San Juan. Photo https://es.wikipedia.org/wiki/Constituci%C3%B3n_del_Estado_Libre_Asociado_de_Puerto_Rico#/media/Archivo:Constitucion_PR.JPG

Violence, colonialism, democracy, progress, autonomy, persecution and death; these are some of the meanings of July 25 in the history of Puerto Rico.

During the Spanish-American War, U.S. armed forces under the command of General Nelson A. Miles invaded Puerto Rico on July 25, 1898, and took possession of the Island. In anticipation of the invasion, on May 12 a fleet of seven warships commanded by Admiral William Sampson fired on the capital of San Juan 1,360 times from their cannons. The indiscriminate bombardment killed seven people and wounded 57. The Spanish army responded with 441 shots that caused two deaths and seven injuries among the U.S. forces. Many buildings, houses and even the San José Church suffered damages. Panic spread among the population and many people fled the city.

On July 28, General Miles circulated a Proclamation among the inhabitants assuring them that their enemy was Spain, whose colonial power in the Americas he wanted to end. The arrival of the U.S. forces was the cause of joy and hope among some, and suspicion and warnings among others. The latter was the case with Ramón Emeterio Betances, the pro-independence leader who, on the verge of death, warned that the intervention of the United States in Puerto Rico could represent “a new colonial conquest.”

Miles wrote: “It is not our purpose to interfere with any existing laws and customs that are wholesome and beneficial to your people as long as they conform to the rules of military administration, or order and justice.” (Proclamation of the General Command of the U.S. Army, Ponce, Puerto Rico, July 28, 1898, signed by Nelson A. Miles)

The proclamation concluded by saying, “This is not a war of devastation, but one to give to all within the control of its military and naval forces the advantages and blessings of enlightened Civilization.” 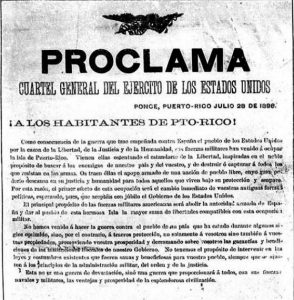 The U.S. promises of freedom, democracy, progress and justice represented a hope for a total change from the abuses of Spanish colonialism. For example, the opening of free trade with the United States was seen by Puerto Rican landowners as a welcome change. However, Miles himself began to give hints of the difficult path awaiting Puerto Rico under the new regime. In General Order 101, the general said: “The effect of the military occupation of enemy territory is the separation of the residents from the former political relationships and to bring forth their duty to obey the authority of the United States, which is the absolute, supreme and immediate occupying military power over the political conditions of the inhabitants.”

Under the authorization and supervision of the U.S. president and Congress, on July 25, 1952, the Constitution of the Commonwealth of Puerto Rico (Estado Libre Asociado, ELA, in Spanish) was ratified. Under this legislation and political formula, the sovereignty of Puerto Rico remained in the hands of Congress and the residents of the Island were also ruled by the U.S. Constitution. The Island is an unincorporated territory, as established by the judicial rulings of the Insular Cases of 1901 that ruled that Puerto Rico is “a territory appurtenant and belonging to the United States, but not a part of the United States.”

The meaning and reach of the ELA have been the focus of intense debates, even in the United Nations (UN), since its creation. One of the UN’s objectives since its founding was to pursue decolonization of people who remained under the colonial power of others after World War II. In 1953, some members of the UN questioned whether the ELA met the institution’s recognized decolonization standards. However, the United States, was exempted from having to present decolonization plans for Puerto Rico, thanks to the approval of the ELA Constitution. The UN General Assembly approved Resolution 748 (VIII), of November 27, 1953, which recognized the ELA as “an autonomous political entity” with a government “invested with attributes of sovereignty” that was freely and democratically elected (Moscoso and Cabrera, 2008).

The final years of the 20th century and the early 21st century  ̶  and specifically through the Puerto Rico Oversight, Management, and Economic Stability Act (PROMESA) proposed and approved by the U.S. Congress in 2016  ̶  have demonstrated once again the Island’s status as an unincorporated territory and Congress’ power, above that of the ELA Constitution, putting into question the “autonomy” of the Island.

You pro-independence activists Arnaldo Darío Rosado and Carlos Soto Arriví died on Maravilla Mountain, located in Villalba, in an ambush by police on July 25, 1978. They were initially called “terrorists,” who supposedly were planning to destroy the communications towers located on the peak. Meanwhile, the governor at the time, Carlos Romero Barceló (of the New Progressive Party) called the police involved “heroes.” A Senate investigation in 1983 and 1984, led by Senate President Miguel Hernández Agosto (of the Popular Democratic Party) and directed by prosecutor Héctor Rivera Cruz, discovered that the two men were unarmed and were assassinated while kneeling. Originally, the police had said they acted in self-defense after being attacked first by the two men. Based on the investigation, cases were presented in court and the police were found guilty. No substantial evidence was found about the government officials that ordered and planned the operation. It is noteworthy that previous investigations by the Puerto Rico and U.S. Justice Departments, as well as the FBI, had cleared the accused police officers. This makes the assassinations a significant example of the persecution of pro-independence individuals and subsequent coverups in the history of Puerto Rico. 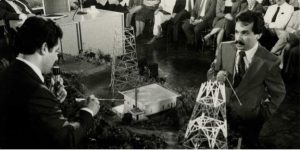 News coverage of the Maravilla events presented huge challenges and achievements for investigative journalism in Puerto Rico. Thanks to investigations by journalist Manuel “Manny” Suárez and coverage by “The San Juan Star,” among other news media, abundant documentation has been left for history. The broadcast on television of the “Maravilla Mountain Hearings,” despite the partisan slant it showed at times, was able to untangle falsehoods that were considered irrefutable facts. At the time, it contributed to the development of a more critical view of the power structures of Puerto Rico and the United States.

The radio program “Te cuento,” broadcast by University of Puerto Rico Radio on June 19, 2014, analyzed the televised hearings on the case.