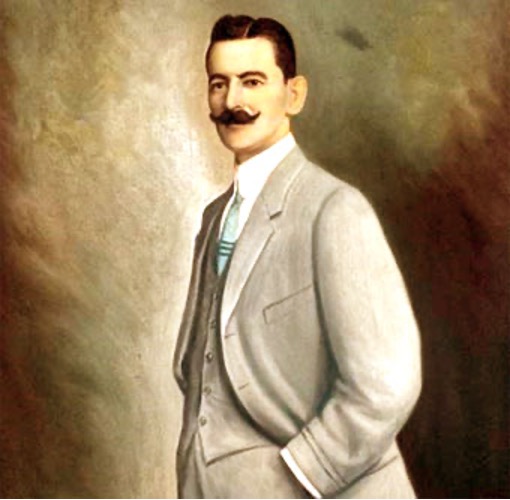 José de Diego was born in Aguadilla on April 16, 1866. His parents were Felipe de Diego and Elisa Martínez. He went to elementary school in Mayagüez. He completed his secondary education in Spain at the Logroño Polytechnic School and then began studying law at the University of Barcelona, though he finally finished his studies in Cuba. It was during this period that he developed his interest in literature and politics, particularly the autonomist ideology. He wrote his first verses in “Madrid Cómico” and in “Semana Cómica.” His writing also appeared in other Spanish publications such as “Las Dominicales del Libre Pensamiento” and “¡Verán Ustedes!”, as well as in the Puerto Rican newspapers “El Buscapié” and “El Palenque de la Juventud.”

In 1885, some of his political and anti-religious poems were published in “El Progreso” of Madrid, and he was imprisoned in Barcelona, Tarragona, Valencia and finally in Madrid. After getting out of prison, he visited Puerto Rico in 1886, when he met the young Carmen Echevarría. She was the inspiration for his poems “Mis bodas” and “A Laura,” which made his name as a poet in Puerto Rico.

He returned to Barcelona to continue his law studies but after falling ill he returned in Puerto Rico. In 1891, he went to Havana, Cuba, to finish his law studies and earned his degree the following year. Returning to the Island, he began working in the law firm of Rosendo Matienzo Cintrón in Mayagüez and in 1893 he established his own firm in Arecibo, along with a partner.

In 1894, he founded the first Autonomist Committee in Arecibo, as well as the newspaper “La República,” through which he promoted his autonomist political ideals along the lines of Rafael María Labra and José Julián Acosta, who favored administrative, but not political, autonomy, to maintain political ties with Spain. In Arecibo he also served as prosecutor for the Court of First Instance in 1895.

In 1897, De Diego supported Luis Muñoz Rivera and Rosendo Matienzo Cintrón in the political merger of the Autonomist Party and the Spanish Fusionist Liberal Party, which was led by Práxedes Mateo Sagasta and was committed to giving Puerto Rico the same political rights as Spanish citizens, as well as administrative autonomy, if they gained power. That year, autonomous governance was granted to Puerto Rico and De Diego was appointed Subsecretary of Justice and Administration. In 1898 he was a magistrate in the Royal Territorial Appeals Court of Puerto Rico.

De Diego was a co-founder and member of the Puerto Rico Union Party created in 1904. In its first stage, the party supported three formulas for the Island’s status: statehood, autonomy and independence. From 1913 on, the Union Party backed independence as the only status solution. José de Diego led the party from 1914 to 1916.  As a delegate and representative, he worked to maintain the Puerto Rican culture and have Spanish as the language of instruction in the schools. For his defense of the Spanish language, he was called “the knight of the race.”

He also legislated for the founding of the College of Agriculture and Mechanical Arts in Mayagüez (1911), today the Mayagüez campus of the University of Puerto Rico. He was president of the Puerto Rican Athenaeum and the Society of Writers as Artists, as well as a founding member of the Antillean Academy of Language (1916).

On one hand, José de Diego’s work related to politics, the economy and the culture have won him a prime spot on the list of the patriots of the early 20th century, an era when he was known for his defense of independence and the Spanish language in the face of U.S. policy. On the other hand, scholars of the labor movement in Puerto Rico have pointed out his anti-worker mentality as a legislator and “his extensive work as a lawyer for the malicious Guánica Central sugar mill,” the largest U.S.-owned sugar can processor and “one of the main exploiters of the Puerto Rican working class” Campos y Flores, pp.85-89).

In his literary work, he was known for his journalistic articles, most of them political in nature. He also wrote books on a variety of topics, such as “Apuntes sobre delincuencia y penalidad” (1901), “El problema de Puerto Rico” (1913) and “Nuevas campañas” (1916).

As a poet, he was part of several literary trends. Though his verses are mainly classified as modernist, they include elements of romanticism and pre-modernism, Parnassianism and French Impressionism. His work also covers a wide range of themes, from the love for a woman or the homeland to religion. De Diego was the author of the books of poetry “Pomarrosas” (1904), “Jovillos” (1916), “Cantos de rebeldía” (1916) and “Cantos de pitirre,” which was published posthumously in 1950.