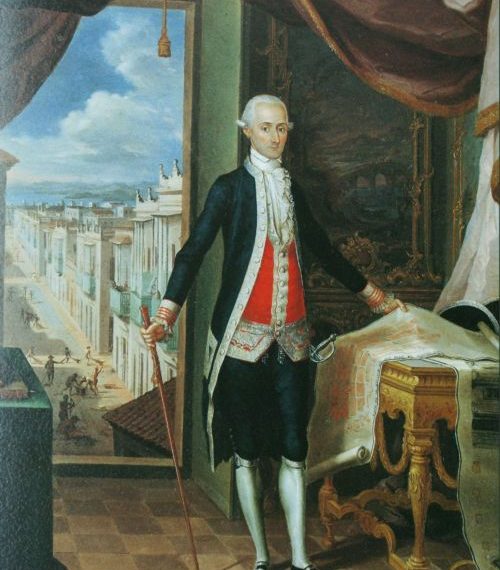 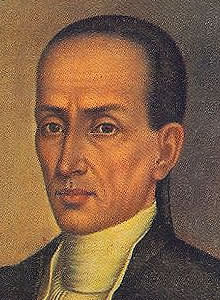 José Campeche y Jordán was the first Puerto Rican painter recognized internationally. He is considered one of the best Latin American portrait artists of his time. His work, anecdotal, historical and religious in nature, showed great attention to detail and physiognomy. Many of his paintings include images that provide glimpses of the Island’s political, social and economic development.

He was born December 23, 1751, in the walled city of San Juan. His parents were Tomás Campeche, born on the island, and María Jordán y Marqués, an immigrant from the Canary Islands. His first studies took place with his father, a painter who did gold plating and had a workshop in the city. During this time, he drew portraits and the figures of saints on the sidewalks in charcoal. Later, he studied philosophy and Latin at the St. Thomas Aquinas Convent in San Juan. Because of his lack of formal instruction in painting, his work at that time showed a linear character. He also studied music as a child and learned to play several musical instruments, such as the flute and the oboe.

In 1775, he met Luis Paret y Alcázar (1746-1799), a prestigious Spanish painter who had come to Puerto Rico after being exiled by King Carlos III. With lessons from Paret, Campeche learned technique and the use of colors. His style evolved, showing more originality and clear tonal influences from French rococo, an artistic style characterized by ornamentation or decoration inspired by nature.

Most of Campeche’s artistic work consists of religious paintings, for which he used as a model the engravings of religious figures he found in books in his personal library. Among these were “The Offering of the Holy Family” (c. 1778), “Our Lady of Grace” (c. 1795), “Our Lady of Bethlehem” (Virgin of the milk) (1806) and a large number of copies of the “Virgin of Bethlehem.” 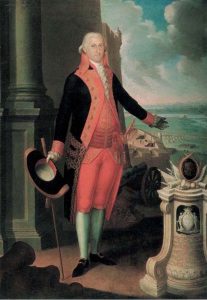 Campeche’s best paintings were his portraits, as he put a lot of attention into physiognomy and details. His portraits show characteristics of French rococo, marked in turn by national elements, both historical and geographical. Among his portraits are “Lady on a Horse” (c. 1785), “Doña María de los Dolores Martínez de Carvajal” (c. 1792), “The Daughters of Governor don Ramón de Castro” (1797) and “Bishop don Juan Alejo de Arizmendi de la Torre” (1808).

References to the Puerto Rican landscape were obvious in works such as “Don Miguel Antonio de Ustáriz” (1790), in which the city of San Juan can be seen in the background, and in “Governor don Ramón de Castro” (1800), which shows a panoramic view of the Condado and Puerta de Tierra, sectors neighboring the islet of San Juan.