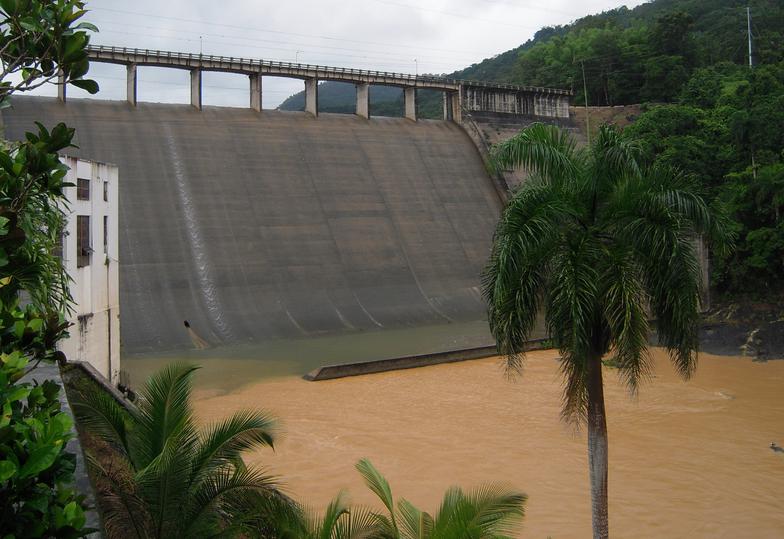 Implementation of electricity and lighting systems in Puerto Rico 1893 – 1993

The history of electricity service in Puerto Rico began in March of 1893 in the town of Villalba, in the central region of the Island. There, José Ramón Figueroa y Rivera, the wealthy owner of a coffee estate, installed a generator in his home that illuminated the first electric light in Puerto Rico. The act was immortalized by Luis Muñoz Rivera in the newspaper “La Democracia” in April of that year. Three years earlier, the Spanish government had issued a decree inviting proposals for establishing an electric energy service for Puerto Rico. There were applications, but nothing was finalized until the crown reported that San Juan would be one of the stops on a trip by the queen’s daughter, María Eulalia, and her husband, Antonio María de Orleans, on their way to the Chicago World’s Fair. This news motivated the Sociedad Anónima de Luz Eléctrica (SALE), led by Melquiades Cueto, to speed up the installation of the first electric lighting system in San Juan, which occurred in May of 1893.

The expansion of electrical service in Puerto Rico, originally offered by private companies, until it was converted into the government agency founded in 1940, the Fluvial Sources Authority, which later changed its name to the Puerto Rico Electric Power Authority (AEE for Autoridad de Energía Eléctrica in Spanish), developed as needed under the social and economic circumstances. The Puerto Rican economy experienced significant growth in the last three decades of the 19th century. Puerto Rican coffee conquered European markets and enjoyed high prices for a dozen years. One result of this economic windfall was that electrical systems were installed in mountain towns such as Villalba and Utuado before they were available in some of the coastal urban centers.

Electrical service in the sugar mills

During the last decade of Spanish rule, in a brief period of four years before the U.S. invasion in 1898, key municipalities such as San Juan, Ponce, Mayagüez and Utuado installed electrical systems that supplied electric power. The private initiative was guided by the intense commercial activity.  After 1900 the sugar industry began a period of accelerated growth and the change of sovereignty from Spain to the United States in 1898 led to the arrival of large capital investments mainly from Boston and New York. The result was the creation of new sugar mills. The Aguirre and Guánica sugar mills were examples of this new era. The number of mills grew until 1910. In this setting of sugar cane cultivation, various electrical systems were created in the sugar mills. These plants installed by the owners produced energy for their own consumption by burning the cane waste during the harvest period. After the implementation of the governmental system in 1937, these installations supplied surplus energy during the dry season. 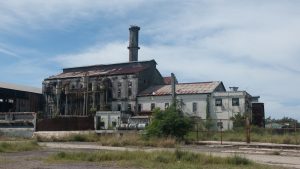 The large-scale production of sugar cane, along with the inefficiency of small irrigation systems, led the Puerto Rico Legislature to approve in 1908 an Irrigation Act that enabled construction on the south coast. It was this vital system of reservoirs that gave rise to the government hydroelectric plants, as an incidental use of the project’s works. The South Coast Irrigation District preceded the famous Tennessee Valley Authority (TVA) project in the United States by 18 years. Although today the Irrigation Division is seen as part of the AEE, in reality it was born as an irrigation system for the island.

It is noteworthy that the monumental work developed by the South Coast Irrigation District and the use of water sources in the construction of dams, tunnels and canals, had the dual purpose of irrigating land and providing hydroelectric energy to the island. These works are some of the largest infrastructure projects ever built in Puerto Rico. These activities positively impacted the construction industry and the labor movement. The first took a giant step forward in its development by importing heavy equipment to the island for the first time and this, in turn, led to training camps on using the heavy equipment for workers and unions.

One interesting fact is that the supply of water contained in the A.E.E. reservoirs is greater than that in the reservoirs of the Water and Sewer Authority. The irrigation system provided millions of gallons of water daily to the Water Authority. By providing water to thousands of acres of land, the system has been a critical factor in the agriculture industry.

After the creation of the first hydroelectric system, a huge demand was created for electric energy, surpassing the supply. The situation meant that demand outpaced planning. On the other hand, the government system, in a form very particular to Puerto Rico, in the beginning supplied service to rural areas and later added business in the urban areas secondarily, when forced by the demand. This characteristic was completely different from the public systems in other nations that usually extended service from the most populous zones to the rural areas.

During the 22 years between the first electric system installed in 1893 and the implementation of the Carite Hydroelectric Plant in 1915, the private sector and foreign capital played the main role in the electric industry on the island, especially Canadian investors who owned the Puerto Rico Railway Light and Power Co. The Valdés Cobián family was a leader at the national level with its businesses in San Juan and Mayagüez. The years following the inauguration of the government electric system in 1915 were extremely important in the development and growth of the Puerto Rican electric power industry. 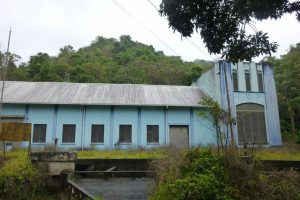 The intense development between 1916 and 1928 by a powerful core group of individual businessmen, municipal corporations and the central government through the Department of the Interior brought electric service to 83 percent of the population and towns of the island by 1924. To integrate the systems and take advantage of the reservoirs, the island government created the Use of Fluvial Sources (U.F.F.) agency in 1927. The work done by this organization significantly affected the use of electricity and consumption continued to grow and accelerate. It was this period of intense productivity, despite a lack of planning, that forged the mold for the Fluvial Sources Authority (A.F.F.)

Important projects such as Toro Negro and Carite No. 3 were begun and finished by the U.F.F. Under the sponsorship of the Puerto Rico Reconstruction Administration (P.R.R.A.), a vast program of rural electrification was begun along with other large hydroelectric projects, such as Garzas in Adjuntas and Dos Bocas in Utuado. The main legislative activity of those years showed a plan to create an interconnected system working under a single governmental administration. 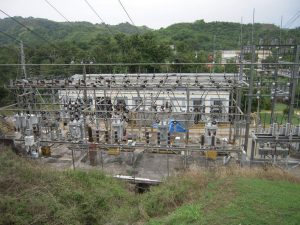 Release of water in a portal at Toro Negro on September 3, 1913. Source: AEE Historical Archive
http://www.recursosaguapuertorico.com/Hidroelectricas-Fotos.html 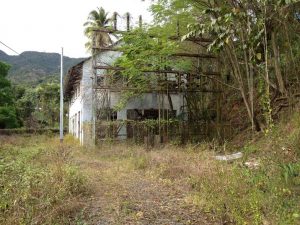 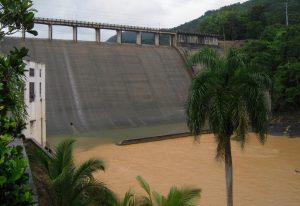 This work of “utilization” raised the need to create an administrative instrument with broad powers to contract, acquire properties, make loans, issue bonds and establish, alter and send bills. In 1941, the first public corporation was created in Puerto Rico, the Fluvial Sources Authority (AFF). This agency had complete control and supervision over the properties, which included a significant number of electrical systems acquired from the private sector and municipalities.

In July of 1942, the Fluvial Sources Authority took responsibility for operating the private system consisting of the Puerto Rico Railway Light Power Co., through an expropriation by the federal government. In the same transaction, the electric trolley system changed hands to the same public corporation. The institution received the system in deplorable condition, particularly the trolleys and the railway. However, by making the best use of the resources available and improvising spare parts, the trolleys kept running. An average of eight routes were kept in operation and transported 2,403,516 passengers.

The rise of the trolley in the first third of the past century constituted an acceptance of this means of transportation by the population of the capital city. The important presence of this company overshadowed its parent company, the PRRLP. To its clientele, it became “the trolley company.”

One of the systems implemented with the trolly route that remains part of our collective memory are the trolly stops. These were listed as 40 points on the route, from the Marina sector in Old San Juan (Stop 1) to the area of today’s University Avenue in Rio Piedras (Stop 40). The beginning of the trolley route from the first stop was not pleasant for the musicians and recording technicians of the time. In the 1920s, radio station WKAQ was located on Tanca Street at the corner of Tetuán Street in Old San Juan and was used as a recording studio. Because it was located along the route of the trolley, the technicians and musicians had to wait until midnight, when no vehicles were in operation. The noise caused by the electric trolley interfered with the recording process, causing them to lose the work they had done.

The current route number 1 of the Metropolitan Bus Authority buses follows practically the same route as the old trolley.

The Puerto Rican custom of identifying locations based on trolley stops that no longer exist has been the source of a problem between the U.S. Postal Service and its customers on the island. The Postal Service’s computerized system does not accommodate identifications based on stops. This cultural difference caused delays in deliveries by the Post Office. Today, the marks of the electric trolley still exist in our daily lives.

The institutional life of the A.F.F. lasted approximately four decades. The factors and circumstances that led to its creation, development and growth are also relevant in the creation of the Water and Sewer Authority: the acquisition of most of the private electric energy systems and the important role of a planning process as an essential part of management. The rapid socio-economic development that transformed Puerto Rico would not have been possible without the participation of what was then the AFF. The impressive demand for electricity that emerged during the first years of the 1950s required a search for alternatives for producing electric energy based on sources beyond the traditional hydroelectric sources. The quiet revolution that rose from Operation Bootstrap and transformed the economy of Puerto Rico from agrarian to industrial would not have been possible without efficient electrical service. 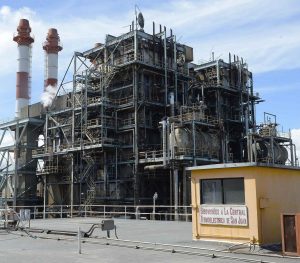 The Electric Power Authority: From Hydroelectric to Thermoelectric Plants

Installing generators to allow the urgent expansion of the electrical system was the dominant note of the 1960s and 1970s, along with the oil crisis that permeated that period and continued into the 1980s.

Law No. 57 of March 30, 1979, changed the name of the Fluvial Sources Authority. For legal and corporate purposes in English, the name Puerto Rico Electric Power Authority (P.R.E.P.A) was adopted. The law took effect on December 1, 1979. The contingency plan of the new entity focused on efforts to look for alternative and available sources of energy, given the multiple problems the corporation faced.

The history of the electrical industry has developed through discovered knowledge and accumulated experience. More specifically, its tradition has been built within an evolutionary process in which activities of generation, transmission and distribution of electric energy, the means of construction, and methods of operation have been integrated within the context of governmental regulations.

From a historical perspective, its pioneers were José Ramón Figueroa in Villalba; Ramón Valdés Cobián in San Juan; Rafael Arrillaga in Mayagüez; Juan Casellas in Utuado; Emilio Pozuelo in Ponce; Guillermo Esteves through the Department of the Interior; and Antonio Luchetti, founder of the Fluvial Sources Authority.

The history of a community can be better understood when you know how its infrastructure developed. How electric and water services were created for our citizens is as much a part of history as are the biographies of our great founders and the stories of our historical monuments. It also allows us, in many cases, to find convincing explanations for the institutional origins that to a large extent formed and permeate reality today.