The centennial of the abolition of slavery in Puerto Rico. Serigraph by José Rosa, 1973. Museum of History, Anthropology and Art collection, University of Puerto Rico, Río Piedras

On March 22, 1873, the Spanish Cortes approved the law that eliminated slavery in Puerto Rico. The decree freed a total of 29,000 slaves of both sexes, which represented 5% of the general population in Puerto Rico. Under the law, slaveowners would be indemnified for the loss of their “property.”

The freedom of enslaved men, women, boys and girls was conditional, as they were obligated to comply with contracts for three years after the abolition of slavery. The same decree also established that they would not have political rights for five years. However, the news was celebrated by most of the population and the expectation that blacks would attack the whites on a large scale (as had occurred in other parts of the Caribbean, such as Haiti) did not materialize.

In Puerto Rican historiography, there are two theories about the cause of the abolition of slavery. The first attributes it to the work of the liberal factions within the Puerto Rican landowning class itself, along with anti-slavery factions in Spain. Historians such as Arturo Morales Carrión and Luis M. Díaz Soler subscribe to this theory. The second, proposed by historian Benjamín Nistal-Moret (in his book “Fugitive and Escaped Slaves Puerto Rico, 1770-1870”), proposes that it was the slaves themselves who worked for their freedom by eroding “the system from within” through complaints and demands, escapes and “limited escapes” (an individual fleeing for a short amount of time, after which the slave would return to the plantation). The historian explains that the measures of resistance gradually wore down the system of slavery. Both theories are correct because the efforts of slaves and anti-slavery factions worked in parallel and one would not have succeeded without the other.

The emancipation of the slaves was the top objective of a generation of liberal island-born leaders since the middle of the 19th century. Before the Civil War in the United States put an end to slavery in its bloodiest form, Ramón Emeterio Betances, who had returned from Paris after earning a medical degree, founded an abolitionist society in Mayagüez in 1858. Along with Segundo Ruiz Belvis, José Francisco Basora and José Remigio Paradís, they took advantage of a law by Governor Pezuela to free slaves by buying them at the baptismal font. This abolitionist activity led to Betances’ first exile from the Island.

In 1865, the Puerto Rican Julio Vizcarrondo Coronado formed the Spanish Abolitionist Society in Madrid to lobby for freedom of the Antillean slaves and began a campaign to influence public opinion through a newspaper founded for that purpose. The following year, the Information Board was convened and three Puerto Rican reformists were chosen as commissioners: Segundo Ruiz Belvis, José Julián Acosta and Francisco Mariano Quiñones.

Although they were only supposed to recommend measures to improve the lives of slaves and ways to implement restrictions for those over seventy years of age, the three commissioners dared to demand “abolition in the province of the disgraceful institution of Slavery, abolition with or without indemnification…” They argued that the work of a free man was more valuable than that of a slave.

The pro-slavery forces mobilized and in 1867 Governor Marchesi exiled to Spain some of the pro-independence reformists in Puerto Rico, including Ramón Emeterio Betances and Segundo Ruiz Belvis. Before they could be arrested, they escaped and Betances issued a clandestine proclamation from St. Thomas that would serve as the call for the revolution that eventually became known as the “Grito de Lares.” In the proclamation, abolition of slavery led the list of the Ten Commandments for Free Men. 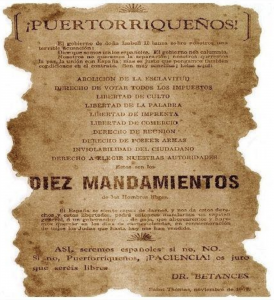 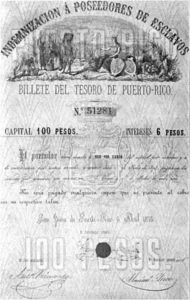 Indemnification of slave owners: Amount paid to owners of slaves when they were freed in 1873. (U.S. Library of Congress)

On September 23, 1868, the Grito de Lares began. About 1,000 Puerto Ricans from all social classes (landowners, professionals, day workers and slaves) participated. They attempted to achieve Puerto Rico’s separation from Spain. Although the Spanish authorities put down the attempt, the revolutionaries took control of the town of Lares and aimed at San Sebastián. The uprising accelerated the abolition of slavery.

In 1870, Román Baldorioty de Castro appeared before the Cortes and referred to slavery as a crime in a speech. Because of that speech, he was prohibited from teaching when he returned to Puerto Rico. However, that same year the Spanish government approved a preparatory law known as the Moret Act, which freed those who were born after it was written and freed slaves age seventy and over. These measures took effect a year later and did not satisfy the abolitionists. But the census showed that the slave population had fallen by almost 5,000 people, despite all the schemes used by the slave owners to avoid freeing old slaves. As the number of slaves dropped, local production rose, which supported the argument of the abolitionists. However, the slave owners and Spanish loyalists tried to stop abolition for good through violent tactics. For slave owners, free labor did not provide the security of slaves, because the laborers could not be forced to work at all hours and without pay.

Meanwhile, anti-slavery propaganda had convinced many Spaniards to ask the Cortes to abolish slavery for good. There was also diplomatic pressure from England and the United States (whose president, Ulysses Grant, was the victorious general in the Civil War, which had resolved the issue of slavery in bloody fashion). In 1872, Puerto Rican representative Joaquín María Sanromá presented an abolition bill. But it was not until Spain itself proclaimed the Republic (in February of 1873, with the abdication of King Amadeo de Saboya) that the abolitionists decided to take the definitive step. The same day the brief Republican period ended, before the closure of the Cortes, Sanromá again made his proposal. Finally, on March 22 of that year, it was presented and approved unanimously.